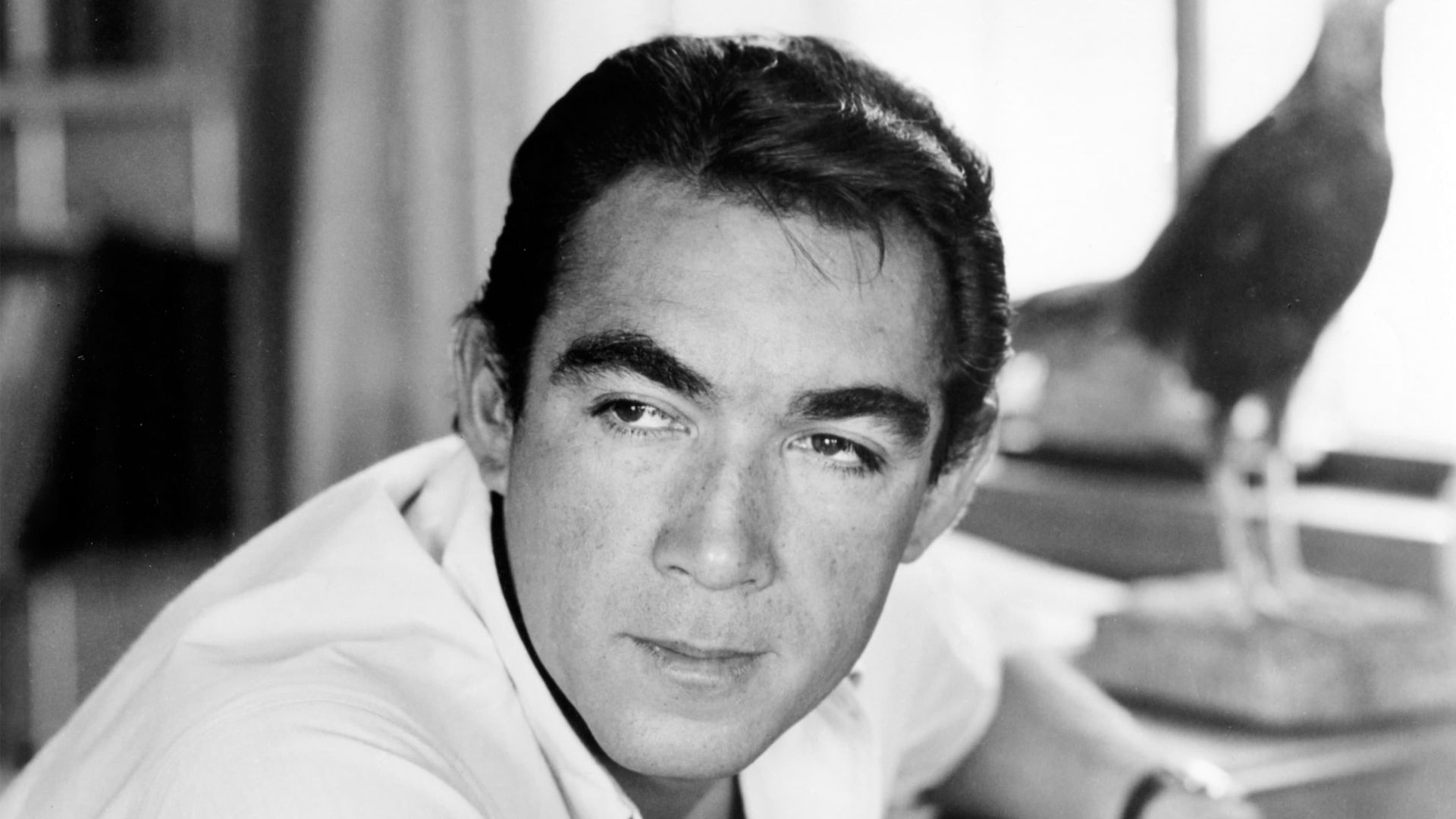 Mexican-American actor, painter, writer, and director Anthony Quinn also directed movies. In a number of critically acclaimed films both domestically and abroad, such as La Strada, The Guns of Navarone, Guns for San Sebastian, Lawrence of Arabia.

He was known for his portrayal of earthy, passionate characters "marked by a brutal and elemental virility." One of his most recognizable performances in movie history is his Oscar-nominated turn as the title character in Zorba the Greek.

On April 21, 1915, Anthony Quinn was born in Chihuahua, Mexico. Shortly after Quinn's birth, his family moved from Mexico to the United States, finally settling in Los Angeles, California. He was just nine years old when his father passed away. Later, Quinn took on odd jobs to support his family.

Quinn was coached by Frank Lloyd Wright after winning an architectural competition in high school. Wright suggested Quinn join an acting program to help him improve his voice for potential professional prospects.

In 1936, he made his theatrical debut in Mae West's play "Clean Beds," which served as the catalyst for his acting career. He was a good candidate to portray ethnic villains in the films "Road to Morocco'' and "Dangerous to Know" (1942) because of his Mexican heritage his cinematic debut, making appearances in movies including "Parole" and "The Milky Way."

His career took off in the 1950s after a string of B-movies in the 1940s. In the 1952 dramatized biography "Viva Zapata!" (based on the life of Mexican Revolutionary Emiliano Zapata), he played Eufemio Zapata. His career was forever changed by this performance.

He had many Italian movie appearances in the 1950s, notably "La strada" (1954), in which he portrayed a dim-witted and dangerous character. In Vincente Minnelli's "Lust for Life," which was released in 1956, he played the painter Paul Gauguin, which was another one of his landmark performances (1956).

He was already middle-aged before he let his advancing years show and developed throughout the 1960s into a significant character actor. With his graying, thinning hair, and craggy features, he played the gruff peasant Alexis Zorba in "Zorba the Greek" in 1964 and an aged boxer in "Requiem for a Heavyweight" in 1962.

He was a very imaginative individual who dabbled in painting and sketching. His work was shown globally, in New York, Los Angeles, Paris, and Mexico City, despite the fact that he had no formal training in painting. Two autobiographies were also written by him, titled "The Original Sin" (1972) and "One Man Tango" (1997). 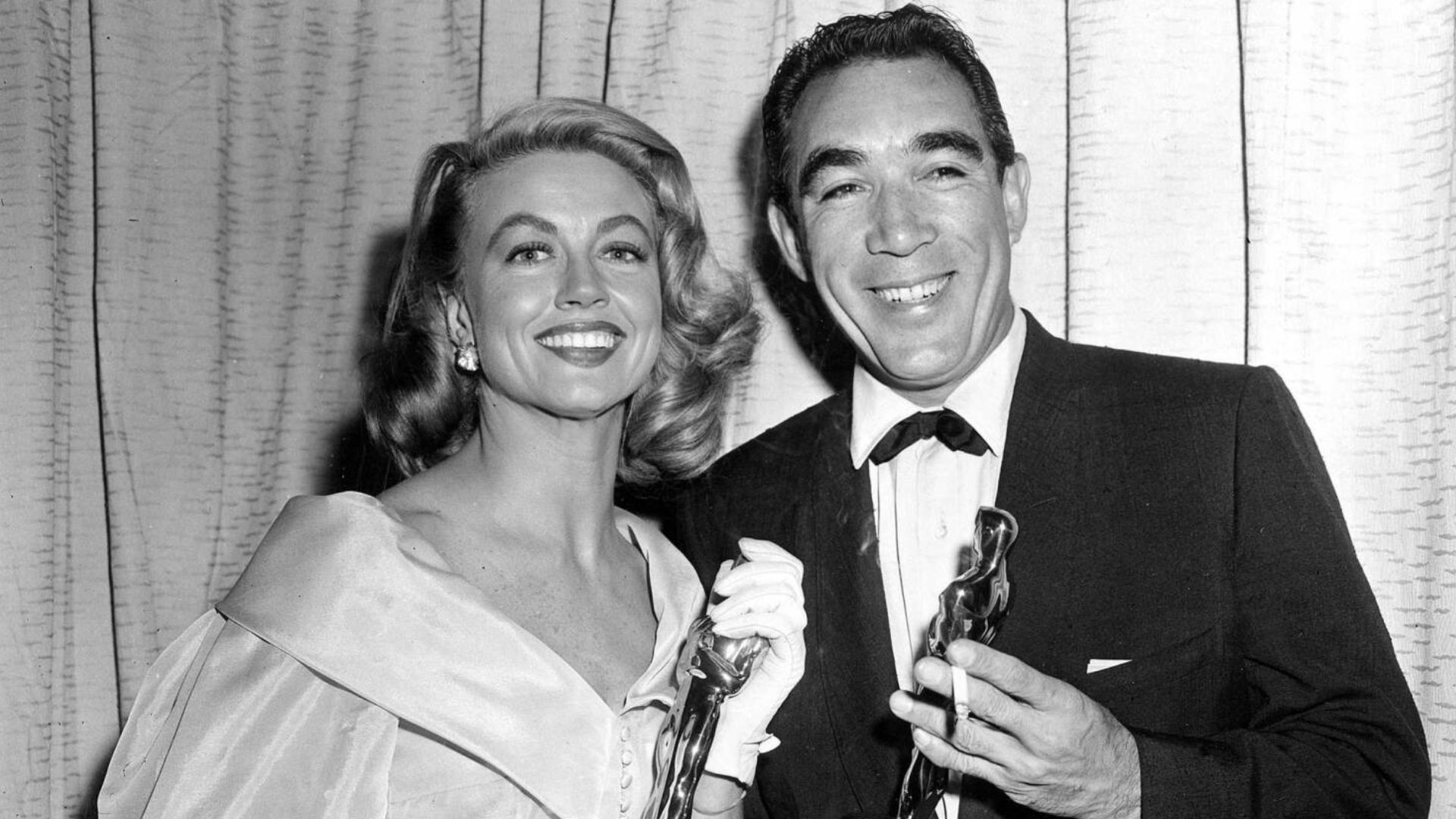 Anthony Quinn And His Wife Smiling Holding Awards In Hand

He was nominated for Best Actor Drama for "Lawrence of Arabia" (1963) and "Zorba the Greek" (1965), Best Actor Comedy or Musical for "The Secret of Santa Vittoria" (1970), and Best Performance by an Actor in a Supporting Role in a Series, Miniseries, or Motion Picture Made for Television for "Gotti."

In addition to receiving the Cecil B. DeMille Award from the Golden Globes. Onassis: The Richest Man in the World (1988) garnered Anthony a Primetime Emmy nomination for Outstanding Supporting Actor in a Miniseries or a Special, and "Zorba the Greek" brought him a National Board of Review Award for Best Actor in 1964.

On October 3, 1937, Anthony Quinn wed Katherine, Cecil B. DeMille's adoptive daughter. The couple had five children together before divorcing in 1965 as a result of Anthony Quinn's liaison with costume designer Jolanda Addolori. Anthony married Jolanda on January 2, 1966.

Anthony Quinn and the event planner Friedel Dunbar had two children together while they were still married: Sean and Alexander. Anthony married his secretary Katherine Benvin on December 7th, 1997, after his divorce from Jolanda in August of that year.

Throughout his life, Anthony was active in social issues and civil rights, contributing money to the Spanish-Speaking People's Congress and organizing fundraising efforts for the defense of Latino adolescents in the 1942 Sleepy Lagoon murder trial.

He participated in a panel discussion at the 1970 Mexican-American Conference, and in 1971, he narrated a video for the Equal Employment Opportunity Commission regarding workplace discrimination against Hispanic Americans. In 1947, Quinn formally became a citizen of the US.

Net Worth Of Anthony Quinn

At the time of his death in 2001, Anthony Quinn, a Mexican-American actor, painter, writer, director, and producer, had a net worth of $20 million. Despite having more than 160 acting credits to his name, Quinn is best known for his roles in a number of well-known films.

What Was Anthony Quinn's Net Worth?

Anthony Quinn had a net worth of $20 million.

What Was The Birth Date Of Anthony Quinn?

Where Was The Birthplace Of Anthony Quinn?

Anthony Quinn became known as one of the greatest Hollywood stars of the 1950s and 1960s because of his tough good looks and potent performances. Anthony Quinn contributions to the film industry will never be forgotten, and we will always keep him in our thoughts.